Week two of Stonebranch Online 2021 offered two webinars: one on orchestrating data pipelines and the other on multi-cloud environments. Both sessions featured product demonstrations of the Stonebranch Universal Automation Center (UAC) in action. Keep reading to learn more.

Orchestrate the Flow of Data Across Your Big Data Pipeline

Scott Davis, VP of Global Marketing at Stonebranch, provided an overview of modern data pipelines and addressed the challenges that data teams face when orchestrating the automated processes that keep them running. He started by describing the data pipeline stages and identified many of the applications and tools available within each stage. There are many.

But it’s not much of a pipeline if your data can’t easily flow from one tool to the next — you need to connect them. Well over half of the attendees indicated that they use a mix of point-to-point integrations and custom scripts to do just that. Nearly as many also confirmed that they’re constantly changing their tools. One-off integrations in an ever-changing landscape of tools? It’s easy to see why there’s so much instability and turmoil in many enterprise data pipelines.

Moritz Roos, Director of Solution Engineering EMEA for Stonebranch, joined the session to demonstrate what a properly orchestrated data pipeline looks like within the Universal Automation Center. In his example, he walked through a live data orchestration workflow, which included:

While these tools only represent a few of the most common ones used by Stonebranch customers, the UAC can similarly integrate and automate any tool in your data pipeline.

Master Your Hybrid IT Environment in a Multi-Cloud World

Dr. Roland Kunz, Field CTO DCS Emerging Technologies for Dell Technologies, provided his thoughts on the multi-cloud world. He made it clear that it’s more important to be cloud-smart than cloud-first.

The hybrid cloud (public and private) is here to stay. Additionally, Dr. Kunz illustrated how enterprises are not tethered to a single cloud service provider. In fact, a multi-cloud strategy boosts agility with choice, flexibility, and predictability. To prepare your IT organization for what’s next, Dr. Kunz recommends that cloud operating models be optimized for speed and simplicity.

Nils Buer, Director of Product Management for Stonebranch, explained the role of automation and orchestration in a successful hybrid IT environment.

More than half of attendees indicated that they’re using two to three public cloud providers, yet fewer than half are streaming data across their cloud providers. Using the UAC, Nils demonstrated how to stream data between cloud service providers (as well as cloud-based applications) automatically. The demonstration illustrated examples from Amazon S3 to Azure blob storage, then Microsoft Azure to SharePoint, and then SharePoint to PowerBI.

First, Miroslav Jovanović of Makedonski Telekom (part of the Deutsche Telekom Group, which is the parent company of T-Mobile US), shares A CIO’s POV: Automating Operations at Makedonski Telekom. He’ll discuss how automating IT Ops helps Makedonski deliver exceptional digital experiences for its customers.

The series continues through the month of October. Register now to put the rest of the series on your calendar and gain access to all upcoming live sessions and on-demand recordings. 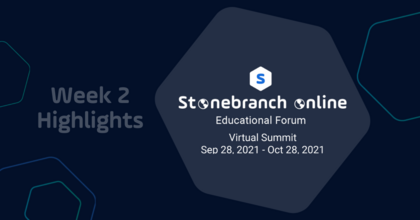