So, how are Service Orchestration and Automation Platforms different from Workload Automation solutions?

More to the point, why should IT Ops professionals and IT leadership care?

As a continuation from our last article, Workload Automation is Dead, Long Live Workload Automation, in this blog post we get to the heart of the matter by boiling it all down to the six most important ways SOAPs have shed the limitations of the traditional WLA solution. And because this isn’t an academic exercise, we zero in on how the SOAP’s exciting new capabilities deliver a better value proposition and enhanced ROI.

Workload Automation…
has traditionally been expected to earn its place at the table by driving efficiency gains and cost savings.

For a long time, efficiency gains and cost savings were enough. Nowadays, however, they don’t justify WLA as a priority for new investment.

Traditional WLA simply can’t automate in those new realms. Therefore, it can’t deliver the much greater level of value that enterprises expect from their automation solutions.

Service Orchestration and Automation, by contrast…
is getting attention because it goes beyond internal process improvements and cost savings to drive new revenue streams.

Unlike WLA, SOAPs unlock the potential for enterprises to use their IT systems to drive entirely new levels of value for their customers. Ways that organizations use SOAPs today include enhancing customer experiences with real-time information and updates, delivering demand-based pricing and creating new product offerings to drive competitive differentiation.

Workload Automation…
came of age when mainframe and distributed systems and applications ruled (with some cloud thrown in).

Gartner put it bluntly in April 2020 when introducing the SOAP category: “Traditional workload automation strategies are unable to meet the needs of heterogeneous IT environments that include cloud-native infrastructure and big data workloads.”

Service Orchestration and Automation, by contrast…
is differentiated from WLA by its being adapted to cloud-native infrastructure and application architectures, while also maintaining mainframe and distributed systems/applications.

SOAPs are the glue that brings an organization’s IT landscape together. Service orchestration and automation boils down to using a single solution to break down automation siloes by connecting the dots between the various applications and platforms within a hybrid IT environment. 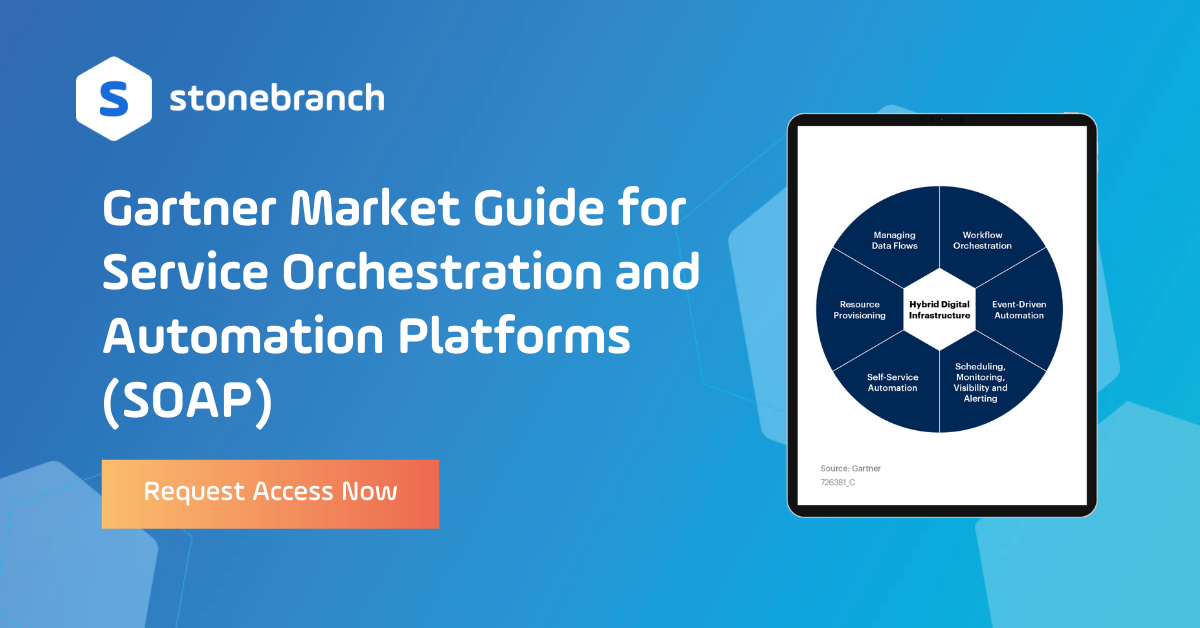 3. Adding Orchestration to the Automation Toolkit

Workload Automation…
as the name indicates, is all about automating jobs and workloads on different platforms and applications.

Yes, you’re automating, but each set of automated jobs and processes is disconnected from the others.

What this means is that an enterprise has the visibility and ability to manage automation for system one, two, three and more. Where SOAP improves on WLA is in interconnecting the automation with workflow orchestration.

The benefit of comprehensive orchestration lies in being able to automate across a larger set of disparate on-premises and cloud systems (looked at another way, you can create dependencies and workflows between and across each system).

What’s more, that orchestration can now be powered by event-triggers to run automation in real-time and managed file transfer capabilities that help move data between on-premises, cloud and containerized microservices environments.

4. Expanding the End-Users Within an Enterprise (and Building Support for Investment in Automation)

Workload Automation…
end users are typically IT Ops administrators, and there’s certainly nothing wrong with that! At Stonebranch, our roots are in job scheduling and WLA, and we’re quite fond of our many long-time IT Ops friends.

Yet, it can be difficult to maintain investment in IT solutions that the organization at large perceives (rightly or wrongly) as mature, specialized or niche.

We see evidence of this phenomenon in Gartner’s retirement of the Magic Quadrant for WLA in 2013. Among the reasons Gartner cited for retiring the category was the low volume of inquiries on the standalone topic of WLA. Anemic projected sales growth was another reason.

Service Orchestration and Automation, by contrast…
greatly expands the end-user base of an organization’s automation solutions.

Citizen automation is a growing trend in business, enabling employees to run automation without the help of IT. SOAPs are designed to help users of all kinds, from DevOps (more on DevOps below) to analysts to line of business users like finance and marketing and beyond.

Some automation solutions even have jobs-as-code and infrastructure-as-code features, making new self-service processes straightforward and intuitive for users.

5. Gaining a Broader View of How and Where Workflows are Running

Reporting capabilities in WLA are not bad. They are just not very expansive. IT Ops end-users will be able to see the status of jobs or workloads and they will be alerted when workflows fail.

The problem with WLA reporting, monitoring and alerting is that it’s dashboard driven, meaning that it’s difficult to really drill in and root-cause issues as they arise. Most WLA vendors in the space don’t provide trend reports or strong drill-down capabilities. So, end-users will know there is something wrong, but it won’t be obvious how to fix it.

In addition, WLA reports tend to be IT-centric and don’t take the broader business value streams into account. That means it’s a constant challenge to incorporate IT performance metrics into business-level ROI reporting.

Service Orchestration and Automation, by contrast…
is built with the kind of advanced, forward looking analytics that give IT Ops comprehensive cross-environment visibility and monitoring.

SOAPs connect disparate environments and tools, enabling them to provide combined monitoring from one central point of visibility. What you see happening in the SOAP market is a deliberate shift toward empowering enterprises with advanced data discovery and visualization analytics. This IT automation trend is in support of enabling users to explore and drill down to previously invisible areas of the data to truly drive new levels of decision making.

Of special note, with SOAPs, analytics can find potential problems before they happen. End users care about this to help meet or exceed SLAs and support alerts before problems arise.

SOAPs broaden your view of how and where workflows are running (in some cases, in real-time), as well as extending your visibility to other users and areas of IT, and thus, the business.

And last, but certainly not least, granular and detailed reporting increases IT’s transparency across the organization. Real-time information and ROI reporting enable IT leadership to clearly illustrate how their team is contributing to the business.

6. Bridging the Gap Between IT Ops and DevOps

Workload Automation…
typically doesn’t do enough to bridge the gaps between Operations and Development.

IT teams are made up of multiple functional roles. Sometimes the groups have competing goals. Nowhere is that truer than the chasm separating IT Ops and Developers.

Ops have the goal of stability and security; their challenge is in empowering and collaborating with their Developer counterparts.

Developers have the goals of speed and agility; their challenge is in maintaining flexibility while getting the necessary support from IT Ops.

If traditional WLA had the answer to the Ops-Dev chasm, the problem wouldn’t be universally acknowledged as it is.

Service Orchestration and Automation, by contrast…
orchestrates a DevOps lifecycle, connecting and automating the multiple tools that developers use along a DevOps toolchain.

Developers are not new to automation. Most use some level of automation within their daily processes. However, it’s often siloed from the rest of the business and unique to that department—or worse, to the individual. IT Ops teams are not typically thrilled with this approach.

This is where SOAPs play a big part in supporting the polar opposite goals of IT Ops and Developer teams. The right orchestration and automation platform enables the two groups to adopt a joint DevOps methodology that improves each group’s performance. This is accomplished via DevOps orchestration that is centrally controlled by IT Ops and provides the agility and speed that Developers require.

Developers are empowered with features like jobs-as-code, infrastructure-as-code and connective automation of the various tools that are used support the DevOps toolchain—like Jenkins, Chef, Puppet and Ansible.

80% of Organizations Can’t be Wrong

In and of itself, the fact that service orchestration and automation platforms differ from workload automation solutions isn’t terribly important. What matters is that SOAPs retain all their high-value workload automation capabilities while building on them to offer a new kind of platform that meets the needs and challenges of complex hybrid IT and cloud-native environments.

As long ago as 2013, Gartner identified standalone workload automation as having peaked. The emergence of hybrid IT and the cloud was diminishing the value of standalone WLA. With hybrid IT and the cloud now fully ascendant, Gartner reports that through 2024, 80% of organizations using WLA tools will replace them with service orchestration and automation platforms to orchestrate cloud-based workloads.

With the profound evolutionary shift underway (as detailed above), the question now is why any organization would want to be in the 20% clinging to standalone WLA solutions. 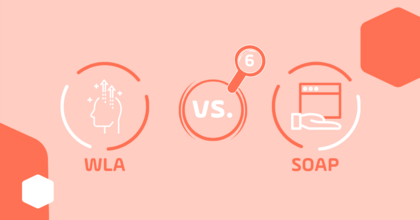