Workload automation has long been used by IT Ops teams to automate IT tasks and jobs. As enterprises have evolved, the requirement to empower line of business end-users with self-service IT automation has increased. This shift has created citizen automators, or end-users who are enabled to kickoff sophisticated workflows from within the solutions they natively use each day – without needing support from IT Ops.

Due to its powerful capabilities, workload automation has emerged as the leading way to tackle the orchestration and automation of IT processes across on-prem, cloud, and hybrid environments. Processes include automating data pipelines, provisioning cloud resources, running complex automated workflows between systems, and more.

Integrations are pre-built installable connections allowing a workload automation solution to communicate and share data with another application or program. An SAP integration, for example, would allow a workload automation solution to perform tasks within SAP, or pull information from SAP to create a report. In general, there are two different types of integrations: upstream and downstream.

An upstream system is any system that sends commands or data to the IT automation platform.

A downstream system is a system that receives commands or data from the IT automation platform.

Below is a diagram of the flow of commands and data between upstream and downstream systems, as they pass through an IT automation platform such as the Stonebranch Universal Automation Center.

How upstream and downstream integrations work:

Of course, individual integrations between any two APIs are always possible without the help of an IT automation platform. However, this approach is simplistic and prone to collapse under its own weight. As enterprises transition to the cloud, creating more complex hybrid IT environments in the process, the best practice is to create a structured web of integrations with a central integration platform. Integrations amongst platforms and applications that span on-prem and the cloud drive centralized management and control. Equally important, by using a centralized approach in combination with upstream integrations, you enable the connectivity required to drive self-service automation.

ServiceNow is a powerful IT service management solution. Once integrated with an IT automation platform, ServiceNow can trigger automation features and functions to perform pre-defined tasks.

Modern enterprises are harnessing instant messenger (IM) technology to enable agility, better communication, and more productivity. Applications like Microsoft Teams and Slack have become central to every business user’s digital toolbox. This has led to demand for advanced upstream integrations that enable execution and reporting of IT workflows and tasks directly from IM platforms.

The Stonebranch Universal Automation Center offers line of business users the ability to trigger or request the status of a workflow in the IT automation platform directly from their Teams or Slack window, using a simple set of commands.

To give an example, let’s say that a business user would like to know the status of a workflow that creates a weekly report for upper level management. That user would simply need to open Microsoft Teams or Slack, and type in the command info for gathering this data. The integration would do the background work and deliver the task status directly to the business user’s chat inbox.

Additionally, Teams or Slack can be used to create approval workflows that are a mix of end-user approvals and automated tasks that trigger once approvals are complete. This creates a centralized audit trail of every interaction. Not only are end-users able to complete these workflows within tools that they use every day, they are able to track and get updates on workflows.

When it comes to transformative power, upstream integrations are popular amongst enterprises. When applications and platforms are connected to the Universal Automation Center, they enable self-service automation, turning end-users into citizen automators.

Allowing citizen automators to trigger and review their own workflows helps reduce the workload of IT Ops, while speeding up the delivery of service. Line of business end-users gain the power to perform advanced background IT processes and cloud automations from the comfort of their most familiar daily tools.

Upstream integrations take workload automation to the next level. Using integrations that extend and connect the functionality of many disparate systems puts the power of IT automation into the hands of business users. This newfound functionality supports both your internal customers and your IT operations team members. By encouraging citizen automation, upstream integrations can dramatically shift the culture of an organization, encouraging more productivity, empowerment and confidence in technical and non-technical users alike. 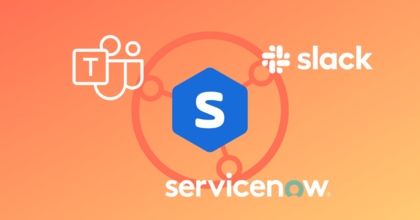