It’s easy to deploy cloud resources and services. It can be as simple as the touch of a button.

But that’s only part of the story. Often, dozens of small steps need to be completed in a particular way to set the environment to your specific requirements and standards. Provisioning cloud resources is really part of an end-to-end business process — one that’s ideal for automation. And that’s where infrastructure-as-code (IaC) comes in.

What is Infrastructure as Code?

For example: because of the rapid growth and popularity of the Universal Automation Center (UAC) SaaS solution, the Stonebranch CloudOps team uses the UAC itself to automate some of the most common tasks on this service. So far, the team has automated all of its cloud deployments, upgrades, patch management, and even some housekeeping items. Keep scrolling to see what these automations look like in action.

Benefits of Infrastructure as Code

There are many benefits to implementing infrastructure as code practices, including:

With IaC, you gain the confidence that your cloud environments are set up exactly as you intend, consistent with your existing instances, and essential security controls and configurations.

As mentioned before, IaC is really part of an overall automated business process. When Stonebranch implements IaC for new SaaS deployments, that process starts with a customer’s signature on a contract. It moves forward when a request ticket is submitted via the SaaS operations helpdesk and approved for initiation. Once the request is approved, the CloudOps team runs the automated deployment. The result is documented and finally handed over to the customer.

In a recent webinar, Stonebranch’s senior cloud engineer Matthew Burke demonstrated the entire end-to-end business process his team uses to deploy new cloud instances. The video below shows a preview of that webinar.

The full session covers everything from helpdesk ticket submission to validation of the successful orchestration. You’ll see how:

You’ll also get the answers to the attendee questions asked during the original live broadcast of the webinar, including:

Why Automate Cloud Infrastructure with a SOAP?

Infrastructure as code has many benefits. Using a service orchestration and automation platform (SOAP) like Stonebranch UAC amplifies the effect of those benefits and adds some of its own.

Best of all, by using UAC to orchestrate infrastructure-as-code instead of something like Jenkins, you gain:

Stonebranch Universal Controller is totally agnostic — it’s compatible with any other tool. That means the automation workflows are completely malleable and flexible to any tools you use now or may use in the future. For instance, in the list of IaC tools above, we could easily switch to Remedy or ServiceNow without affecting any other tasks in the workflow.

The end-to-end business processes that wrap around new cloud infrastructure can involve hundreds and hundreds of steps. If done manually, it’s time consuming and error prone. With the repeatable, automated practices that are the cornerstone of IaC, you gain speed, consistency, and scalability.

If you’d like to learn more, reach out to your Stonebranch representative or request a demo. 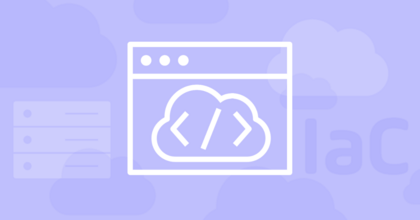