The company uses a mainframe and many distributed, open systems to process its data. In addition, Coop uses cloud service providers, like Microsoft Azure.

Much of Coop’s growth has come from acquiring smaller grocery chains. The need to integrate multiple IT systems resulted in an increasingly complex IT infrastructure.

With a growing variety of IT systems, Coop’s original solution, BMC Control-M, struggled to accommodate the growing diversity of workloads.

As Coop Denmark modernized its IT infrastructure, the company recognized a need to support an increasingly complex hybrid IT infrastructure. Coop expected the volume of daily tasks it would need to process to increase dramatically, from about 20,000 into the hundreds of thousands.

Coop’s existing workload automation software, BMC Control-M, could not meet the integration or transparency requirements necessary for both onpremises and cloud-based orchestration.

The IT team sought a more universal tool that could support growth in daily task volume while also seamlessly accommodating applications such as SAP, one of the company’s ten standard platforms.

“With Stonebranch, we’re not just a number, but a client who is heard. Stonebranch support has been outstanding, both during our migration from Control-M to Universal Automation Center and after. It is uncommon to get this kind of dedicated service from large suppliers in the industry.”

Implementation was fast and costeffective: Stonebranch had the Universal Automation Center up and running at Coop in just two weeks, compared to a three-month installation of its previous BMC solution. In addition, Coop was thrilled to share that they were able to complete the installation at a reported $60,000 less in implementation cost.

Stonebranch’s proprietary automation conversion tool played a significant role in reducing the solution’s time to market by reducing conversion time by 50 percent. Additionally, by taking advantage of virtual machines to run its Universal Automation Center solution, Coop is saving $28,000 a year, according to the company’s calculations. 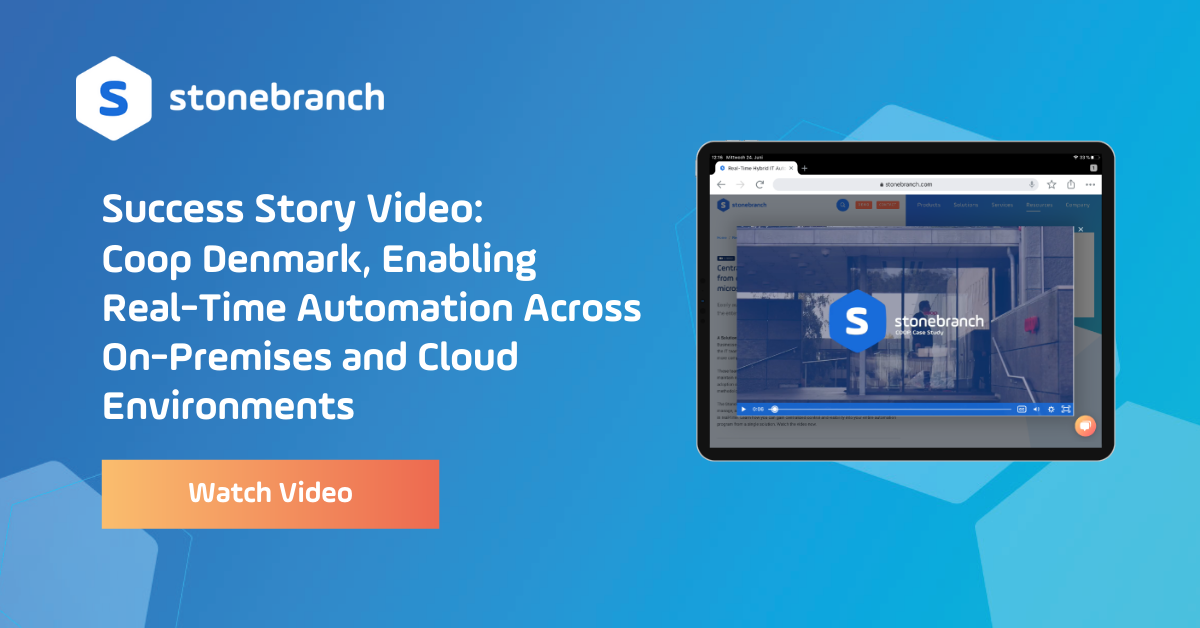 Another time saver was the support Coop received during and after the implementation. Palle Vesterlund, Coop Denmark’s IT Operations Manager, recalls how his team wasted two weeks trying to make changes with their legacy solution, while Stonebranch resolved similar requests within an hour.

As Coop aimed to expand its workload automation user base from 25 to 50, the management team was thankful that it did not have to spend eight hours to train each user, which is what it took to train each individual on their previous solution.

With the highly intuitive Stonebranch platform requiring only two hours of training per user, Coop calculated that it has saved $44,000, freeing up 300 staff hours for more value-added tasks.

“We can process workflows 20 percent faster, and processes are complete hours earlier.”

“With Stonebranch automation, we can process complex workflows 20% faster than with our prior solution, and processes are complete hours earlier,” said Palle Vesterlund, IT Automation Specialist at Coop. Automated batch flows alone are saving two hours a day. And with no abnormal ends (ABENDS) to handle, Coop has reduced its production backlog by 25%.

With nearly 100% of its processes being run by the Stonebranch Universal Automation Center, Coop has achieved the kind of complete transparency that enhances and eases compliance and simplifies audits.

These audits—comprising between five and ten tasks—used to take up to ten staff hours every day to perform manually.

With the Universal Automation Center, audits take only a quarter of the time they used to. This saves Coop more than $275,000 a year in audit preparation time—once again, freeing up staff for higher-level tasks.

Schedule a Demo
Back to Success Story Overview