Workload automation in the cloud invariably begins as a hybrid process, except perhaps in very small organizations. Legacy software and hardware must migrate to the cloud in incremental steps. The diverse data sets that support these systems must also ease into cloud deployments in pieces. In the meantime, some assets remain on-premises while others span public and private cloud instances.

Workloads need to stay in continuous operation regardless of where the systems and data reside. They must therefore support hybrid cloud architectures. And it’s essential for a modern workload automation solution to orchestrate cross-platform processes and jobs from a centralized view, with real-time scheduling that intelligently adjusts to changing business needs.

This article uses statements and quotes to explain how Stonebranch customers use workload automation in their cloud and hybrid cloud environments. A quick note of thanks to our amazing customers, who were kind enough to share their experiences on  IT Central Station's Stonebranch review page.

What does it take to make workload automation work in the cloud? According to a senior technical analyst at a financial services firm with more than 10,000 employees, a workload automation solution for the cloud is one that can “work across the entire suite of technologies,” including his core Windows and Unix platforms. He said, “When it comes to agent technology and compatibility with other vendors, from a platform perspective it was the one vendor that fit all the platforms that we have, from your old platforms — mainframe, NSK, IBM — to the new ones, going into cloud and containers, etc.” He praised Stonebranch for being platform agnostic. A senior DevOps engineer at ING Tech Poland, a financial services firm with over 500 employees, felt that with Stonebranch, “Our organization could enter the cloud at full speed.” 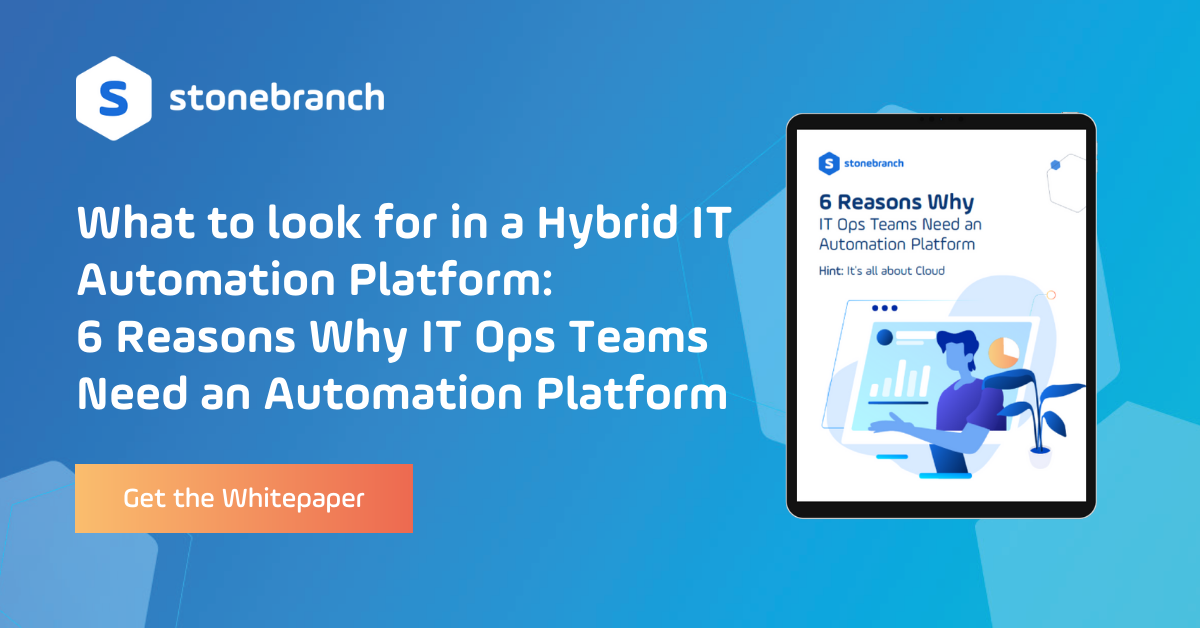 A workload automation solution must be good at automation. This may sound obvious, but it’s apparent that not all the tools on the market meet this criterion equally. For example, Charvi S., a technology analyst at a retailer with more than 10,000 employees, commented, “Earlier, it used to take us a lot of time for file transfers and creating a backup, but after this [Stonebranch] automation, the pain and time have been reduced a lot.” A user at a financial services firm agreed, saying, “Universal Automation Center helped us to automate manual tasks and reduce the time for people to do manual tasks.”

A user at an insurance company with over 500 employees remarked that Stonebranch “made the job of automating tasks easier, especially tasks that cross application boundaries.” He then said, “Since we have applications that cross multiple platforms, this simplified where tasks get automated from several locations down to a single controller.” A user at a financial services firm with more than 10,000 employees was pleased that Stonebranch enabled him to “automate batch processing jobs that used to run on cron and had very ambiguous logging.” As he shared, “It really helped us automate many manual jobs as well that were time-consuming and tedious.”

The hybrid cloud is sufficiently making it clear that workload automation solutions should be easy to use. Stonebranch earned high marks in this context, with Charvi S., a technology analyst at a retailer with more than 10,000 employees, saying, “It is very user-friendly, and it is quite easy to use. Moreover, you can integrate a lot of applications by using this simple tool, and it holds all the details in a very simplified manner.” A user noted that the layout of Stonebranch’s user interface (UI) is “solid.” This, as he said, “has really helped scale automation efforts.” Effective cloud migration relies on the ability to scale automation.

“Stonebranch enhanced the digital transformation at our company, through the dashboard,” said Brian, a senior system programmer at a retailer with over 1,000 employees. He added, “We run a customized dashboard for our operations team, where we can quickly see the issues. We can see running tasks. We use a lot of started and finished, late finished, late started. We also have some gauges where we can see jobs that exceed their average runtime or estimated end-time. It’s helped our operations team see issues ahead of time, instead of four hours later when we’ve already gone past the point of no return.”

Continuing the theme of simplicity, IT Central Station members shared how important it is for a workload automation solution to provide centralized management of jobs. A user shared that Stonebranch “provided us with a central overview of our Linux and Windows agents and the ability to monitor the exact software-versions of the installed agents.” An application manager at an insurance company with over 10,000 employees explained that his team has centralized scripting in one library. He liked the fact that Stonebranch “centralized scheduling and file transfers running on a couple of hundred agents (Windows/Unix/Linux). It has the possibility to connect multiple tasks in a workflow across domains and operating systems.”

Several IT Central Station members shared that Stonebranch had improved their ability to schedule jobs. This included the identification of dependencies between systems, which are common in the hybrid cloud. Notable comments included:

The hybrid cloud is complex. That does not mean it has to be complicated to manage. Users favor workload automation solutions that can handle complicated workloads. For instance, the ability to connect multiple tasks in a workflow across domains and operating systems was a valuable feature of Stonebranch according to the insurance company application manager.

As Mike B., a systems programmer II at an insurance company with over 500 employees noted, “Since we put in Stonebranch, compared to our older scheduler and systems, we've had better visibility, better alerting, better restart-ability, and better retry-ability. For instance, if a file transfer fails and it doesn't send, we can tell it to try 30 minutes later, and that reduces manual intervention for a once-and-done type of failure.” He further related, “In terms of our company's digital transformation, it’s definitely become a central component of our processing and our workflows. It’s allowed us to integrate disparate systems into this system, so we can monitor and schedule activities on those servers.”

Automation platforms are evolving as organizations move ahead on their digital transformation journeys. A big part of that evolution includes automating workloads across hybrid cloud or hybrid IT environments. However, the workload automation solution continues to change. The migration to the cloud is so prevalent that in April 2020 Gartner unveiled a new category of next-generation automation solution: the Service Orchestration and Automation Platforms (SOAP).

Largely, SOAP revolves around extending the management of automation for cloud service providers and SaaS applications in the same way that enterprises have historically managed their on-prem environment. Gartner forecasts that 80% of enterprises that use workload automation tools will move to a SOAP by 2024, but the movement has already begun. 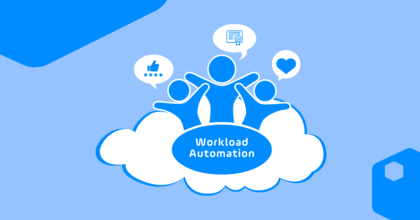