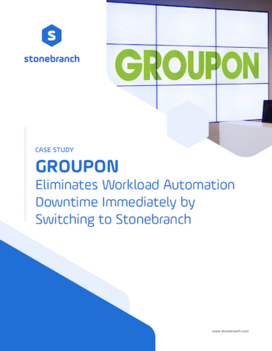 Add This To Your Technical Library

Ever since Groupon began operations in Germany, it had used open-source software from SOS Berlin for job scheduling. However, the solution had become unstable and was beginning to miss key deadlines. It failed at least once every two weeks and sometimes as often as three times a week. Each time, an administrator had to spend 20 minutes finding and fixing the problem before operations could re-start. In addition, the IT team could not schedule or run a task on a server unless SOS Berlin was already installed on it. Therefore, Groupon wanted a solution that could schedule and run tasks on a remote system without having to install workload automation software first.

Why Universal Integration Platform V2.0 is a Big Deal

During this detailed introduction video, you will learn how easily develop & create your own integrations to connect UAC with 3rd-party applications and…