Editor’s Note: Given the sheer volume of businesses undergoing digital transformations in 2021, we thought it timely to refresh our 2019 perspective on RPA and WLA.

From CIO.com to VentureBeat, RPA has been getting quite a lot of coverage lately. For reasons ranging from COVID to compliance, organizations are looking for ways to automate routine, repetitive tasks. In doing so, companies can reduce employee workload to remove human error.

However, RPA isn’t designed to automate long-running business processes. This is where workload automation (WLA) comes in. WLA orchestrates complex processes — even processes that include RPA-managed tasks.

When RPA and WLA work together, you get the best of both worlds. This article will help you understand what each technology is and isn’t, as well as how they complement each other’s automation capabilities.

What is Robotic Process Automation?

The Institute of Electrical and Electronics Engineers (IEEE) has attempted to create a standard means of using technology phrases. If we look at how the IEEE defines RPA, it says that it should be used to describe a:

“Preconfigured software instance that uses business rules and predefined activity choreography to complete the autonomous execution of a combination of processes, activities, transactions, and tasks in one or more unrelated software systems to deliver a result or service with human exception management.”

Note here that this definition includes human exception management, which essentially means that humans still have a role to play in RPA. RPA is a great way to automate very repetitive and simple tasks. However, automated RPA tasks must be predefined; they’re unable automatically add new logic or ways of working.

What’s the Difference Between RPA and AI?

RPA and AI sometimes get lumped into the same category. While the R in RPA stands for robotic, it’s a misnomer to confuse these two technologies. In the case of artificial intelligence (AI), the IEEE similarly defines it as being:

This definition removes humans from the equation. AI is empowered to think and learn to develop its own logic. Several research studies have shown that around 80% of problems within an operational IT environment are caused by humans; that is, it’s usually the carbon-based lifeforms that cause the problems, not the silicon-based ones.

The relationship between RPA and AI is more likely to be that data created by RPA tasks will feed AI applications.

What is the Difference Between RPA and WLA?

RPA is typically used as a resource-efficient means to carry out relatively simple actions that must be completed time after time after time. In other words, RPA excels at carrying out fixed tasks with simple triggers – such as moving a set of data from point A to point B at a specific time interval.

Where RPA begins to struggle is when logic must be employed. It won’t be as helpful at moving data from point A to point B, C or D, depending on context or based on variable trigger criteria.

WLA harnesses more data and operational intelligence to support logic-based decisions or workflows. For example, modern WLA platforms can define target storage areas for data based on business-defined needs. In addition, WLA is also able to choose the right time for an action to take place, according to variables that include cost, bandwidth optimization, immediacy, or some other factor.

Using the same example above, a WLA solution will move a set of data from point A to any point, some points, or all points in real-time, based on system events or at set time intervals.

In the end, RPA is used to repeat simple tasks and WLA is used to manage complex IT processes using built in logic.

RPA: Disciplined to a Fault

One thing to bear in mind, however, is that RPA does exactly what it is told. Which is great, until it isn’t. That is, if it’s fed garbage, it’ll replicate that garbage until it is manually stopped. As an example of RPA gone bad, you may look to what happened when a server configuration change cascaded out of control for Google Cloud Platform. In combination with RPA technology, the error caused major shutdowns not just of its own environment, but across the whole internet.

An RPA task within a broader WLA monitoring process could have potentially seen the problem earlier and stopped the cascade from happening. As it was, the RPA just kept on doing what it had been told, causing major problems in the process.

How Do WLA and RPA Work Together?

WLA and RPA both have important roles to play in IT — they’re great partners in automation.

The on-demand Merge Robotic Process Automation with Workload Automation webinar offers a sample WLA/RPA partnership. It demonstrates  how Stonebranch integrates with UiPath, one of the larger RPA vendors, to carry out a billing process across multiple platforms, including SAP.

What’s Next in IT Automation?

RPA and WLA both have their place in the overall IT automation world. Each technology will continue to evolve, enabling emerging trends like hyperautomation and intelligent automation. Together, the sum of their parts are greater than the individual pieces, allowing organizations to achieve automation at scale and move your company through its digital transformation. 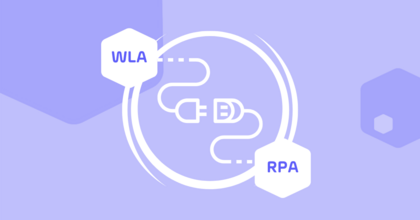